Yes, you read that right. I’ve actually read a mystery novel. I can’t believe it either tbh.

You guys know I prefer books that are either Contemporaries, or Fantasy (in all shapes and forms). SO WHAT HAPPENED HERE??? WHY DID I READ A MYSTERY NOVEL??? ME OF ALL PEOPLE???

Well, back when I first started out on Netgalley, I requested (and was approved for) Geekerella. I was SO excited that I just had to check out which other books Quirk Books had to offer—and Ten Dead Comedians caught my eye!

I don’t usually read mysteries but the synopsis caught my eye, and I felt like this would be a nice change to what I usually read!

Did the book live up to my expectations? Was it actually a nice change? Or did this book scare me off from the mystery genre forever? You’ll have to read my review to find out* 😛

*oh my god, could I get anymore annoying 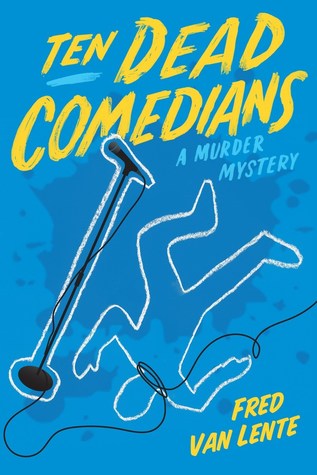 “Fred Van Lente’s brilliant debut is both an homage to the Golden Age of Mystery and a thoroughly contemporary show-business satire. As the story opens, nine comedians of various acclaim are summoned to the island retreat of legendary Hollywood funnyman Dustin Walker. The group includes a former late-night TV host, a washed-up improv instructor, a ridiculously wealthy “blue collar” comic, and a past-her-prime Vegas icon. All nine arrive via boat to find that every building on the island is completely deserted. Marooned without cell phone service or wifi signals, they soon find themselves being murdered one by one. But who is doing the killing, and why?

A darkly clever take on Agatha Christie’s And Then There Were None and other classics of the genre, Ten Dead Comedians is a marvel of literary ventriloquism, with hilarious comic monologues in the voice of every suspect. It’s also an ingeniously plotted puzzler with a twist you’ll never see coming!”

*I received an ARC from Quirk Books via Netgalley in exchange for an honest review. This did not affect my opinion in any way!*

In Ten Dead Comedians, a text by popular comedian Dustin Walker goes out to 10 comedians (duh), inviting them on a private island to work on a new comedy project together. But when they get there, Dustin is nowhere to be found, they have no cell reception and therefore no way to get off the island and they’re getting killed off one by one.

It’s sounds like quite a story, doesn’t it? I’m not usually into mysteries but the plot sounded very intriguing so I thought I’d give it a chance!

The first chapter starts with all 9 comedians getting the text aka 9 DIFFERENT POVs – I was already confused after the third comedian was introduced and I thought to myself “Oh no, this is exactly why I don’t like multiple POVs!” but I still continued on.

Thankfully, it was told from third person and not from first person because I don’t think I would have been able to distinguish the characters! I mean, it wasn’t really off to a good start and I still felt myself getting confused throughout pretty much the first half of the book!

There were 10 different characters but they were all comedians and it was really hard to keep up with them! None of them had a strong personality, a defining character trait or something about their looks that would help distinguish one from the other – instead no one really stood out to me!

This is going to sound weird but the more comedians died, the easier it was for me to familiarize myself with the characters and to really get who was who. Since there were fewer people, it was a lot easier to remember their names and know what their personality was like. I kept confusing everyone in the beginning of the book and even forgetting some characters!

The plot had its good and its bad moments – I always liked when a comedian was about to die (this sounds so WEIRD I’M SORRY BUT IT WAS EXCITING) because there were so many creative and unexpected ways to die and all these hidden traps! Being someone who doesn’t really read mysteries, it was so intriguing!

I especially liked the ending of the book! I was so stunned when everything was revealed because it was so unexpected! And I loved the process of the mystery being uncovered and figured out by the remaining characters! It’s such a plot twist when you find out who the murderer is and how everything was planned and executed! I really liked that I was surprised and it wasn’t easy to guess at all!

The very last paragraph was so lovely as well and when I finished reading the last few lines, I was left with a good feeling (I can’t really explain but it was NICE!).

What I really didn’t like was the ending of each chapter. After every chapter, there would be a comedic act/performance of one of the comedians – for what reason, I don’t really know (comedic effect maybe?) – but I didn’t find them funny AT ALL and I didn’t care so I always skipped them!

As someone who doesn’t read a lot of mysteries and therefore having nothing to compare it to, I found Ten Dead Comedians to be very enjoyable! I’m not sure if it’s for the “die-hard” fans of the mystery genre but I felt like it was well-done and the plot twist was something that nobody could have expected (even the die-hard fans *winks*).

Do you like to read mysteries? What is your favourite mystery book of all time? Do you enjoy reading books with multiple POVs or not? Let’s chat in the comments!