I have bad news.

I wish my first review of the year was a positive one, but this book was just.. very disappointing. And it made me extremely uncomfortable.

Spoiler alert: this is a 1 star book.

I honestly don’t give out 1 or 2 star ratings often because I’m simply too nice lol but after writing this sort of very RANTY review, I realised that there is nothing good about this book and I gave it 1 lonely star.

Obviously, this review is going to include spoilers of the book, but I honestly wouldn’t recommend any of y’all to read it anyway so I think you’ll be fine 😛 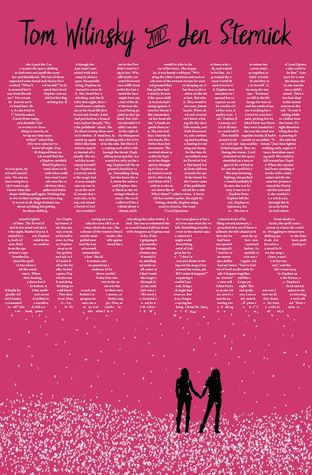 High school students—Soph, who attends private school in Manhattan, and Tess, a public school student who lives on a dairy farm in New Hampshire—are thrown together as roommates at a week-long writing conference. As they get to know each other and the other young women, both Soph and Tess discover unexpected truths and about friendship, their craft, and how to hold fast to their convictions while opening their hearts to love.

*I received an ARC from Interlude Press via Netgalley in exchange for an honest review. This did not affect my opinion in any way!*

Welp, this was garbage.

I feel bad for writing this negative review and posting it on my blog, but I can barely find any positive things to say about Snowsisters.

This book is about two girls who are polar opposites—Soph is from a wealthy, upper-class family living in Manhattan and Tess lives the rural life on a dairy farm run by her family. Both of them end up being roommates at a week-long conference for female writers.

God, I don’t even know where to start.

The few positive things about this book are as follows:

As you can see, I could have summed up the positives in one paragraph. The rest of the book was just bland, contradictory and offensive trash.

YES YOU HEARD THAT RIGHT. THERE’S TRANSPHOBIA AND IT DOESN’T GET CHALLENGED DURING THE ENTIRE FIRST HALF OF THE BOOK.

So. There’s this character Chris who is very much the definition of a white feminist. She’s roommates with Orly who is trans. Chris accidentally finds out about Orly when she changes her clothes in their room. Chris then proceeds to talk to literally EVERY PARTICIPANT OF THE CONFERENCE to tell them that Orly is “actually a boy” and constantly misgendering her.

And guess who challenged it??? NOT. A. SINGLE. PERSON.

I’ve already had enough of this shit the first time it happened, but it happens over and over again.

Tess LITERALLY thinks to herself (god, I can’t believe this is an actual real thing that happened) “hmmm, this is somewhat wrong, but I don’t want to get involved. Maybe I should focus on making friends.” and then she leaves the room to literally make friends in THAT moment.

What?????? You’re not gonna say anything because you want to focus on yourself right now???? You acknowledge the wrong behaviour but you’re just gonna leave????

The authors of this book mentioned in their author’s note how Soph and Tess are unreliable narrators, but I personally just think that’s a bullshit excuse??

Right now, you might think “Jackie, why did you keep reading this transphobic trash of a book?”. Well, I read some reviews beforehand and found out it was challenged later on in the book and I wanted to see how that turned out.

Oh boy, it didn’t get any better tho.

When Chris’ transphobic remarks DO finally get challenged, the whole thing is handled very poorly.

Here’s what went down:

The conference organised a poetry slam and anyone could go up. Orly is the first to go up on stage and she delivers a powerful poem about her being trans and wanting to be accepted for who she is.

Another girl, who insulted Orly behind her back due to Chris’ influence, performs a response poem in which she apologises to Orly and accepts her for who she is.

Chris runs off to go cry in a room because she doesn’t want to be “slammed” by the others for what she did (AKA BEING TRANSPHOBIC). She literally proceeded to play the victim????? WHAT??????

Soph and Tess end up literally CHILLING with her and comforting her like wtf??? They’re just like hey, we’re best buddies now! In the end, they do challenge Chris’ behaviour and explain to her how what she did was wrong, but STILL. The whole thing made me sooo uncomfortable.

By the way, do you wanna know WHEN the scene happens in which Chris’ transphobic remarks finally get challenged??? Hold onto your seats for this one……. AT 66%.

IT TAKES OVER HALF OF THE BOOK FOR SOMEONE TO FINALLY SPEAK UP ABOUT THIS TRANSPHOBIC SHIT. I can’t believe this.

Soph was friends with Orly and she didn’t find out about her being trans and people talking behind her back until much later in the book and when she finds out, she actually spoke up about it. But here were several instances where Tess thought to herself that this behaviour was wrong and she never fucking did something about it.

And that brings me to my second point. Soph and Tess’ actions felt so unbelievable and FAKE to me. I thought both of them were very dull characters with literally no personalities.

Every chapter started with Soph’s POV and then switched to and ended with Tess’ POV. However, I found myself not being able to distinguish the two of them AT ALL. A lot of the time, I was reading a new chapter, thinking I was still in Tess’ mind when actually it was Soph.

Both of them had very similar voices and they were just very one-dimensional and pretty interchangeable.

There were a few instances towards the end where Soph and Tess speak up about Chris’ transphobic behaviour, but their words and actions seemed SO unnatural to me. The whole thing completely lacked depth and I didn’t buy into it at all.

Towards the end of the book, Tess was supposed to have this great character arc where she finally takes the lead and speaks up for herself and what she believes in, but when that finally happened, it felt bland, underwhelming and unrealistic.

Overall, the two of them were incredibly one-dimensional characters with very stereotypical personalities. It was your typical rich girl from the city falling for the poor girl from the rural area trope and it wasn’t even executed well.

And their relationship blossoms towards the very end of the book but it is obviously insta-love since this book takes place over a week. It also lacked emotional depth and I honestly did not care about them at all, whether it’s the two of them apart or together.

I honestly do not get the point of this book.

Soph and Tess’ character arcs and “goals” seemed so insignificant and I feel like the end didn’t resolve anything. And I honestly understand why they had to have the whole conflict between a trans girl and a transphobic character??? It literally did NOTHING to somehow “enhance” the story and it didn’t help to resolve something at the end. IT WAS JUST SO POINTLESS.

The whole book was just incredibly superficial and it lacked depth on so many levels—characters, plot, writing, EVERYTHING. I would not recommend it at all.

I didn’t really know how to approach writing this review at first because I had a lot to say and I had no idea how to put my feelings into words, but I think I managed quite well!

Actually, I would have loved to rant about this book IRL aka make a whole video about it. But I’m a shy and nervous anxiety bean.

I hope you enjoyed my rant! Let me know if you wanna see more of these 😛

By the way, happy Valentine’s Day??? Tbh I never cared about this day UNTIL TAHEREH SAID THAT SHE’D POST A SPECIAL WARNETTE RESTORE ME SNEAK PEEK TODAY AND I’M NOT READY.

Have you heard of/read Snowsisters before? What was the last 1 star book you’ve read? Since the trans rep in this book was handled so poorly, do you have any recommendations for fantastic books about trans characters? Maybe even #ownvoices ones? ARE YOU READY FOR THE RESTORE ME TEASER??? Let’s chat in the comments!